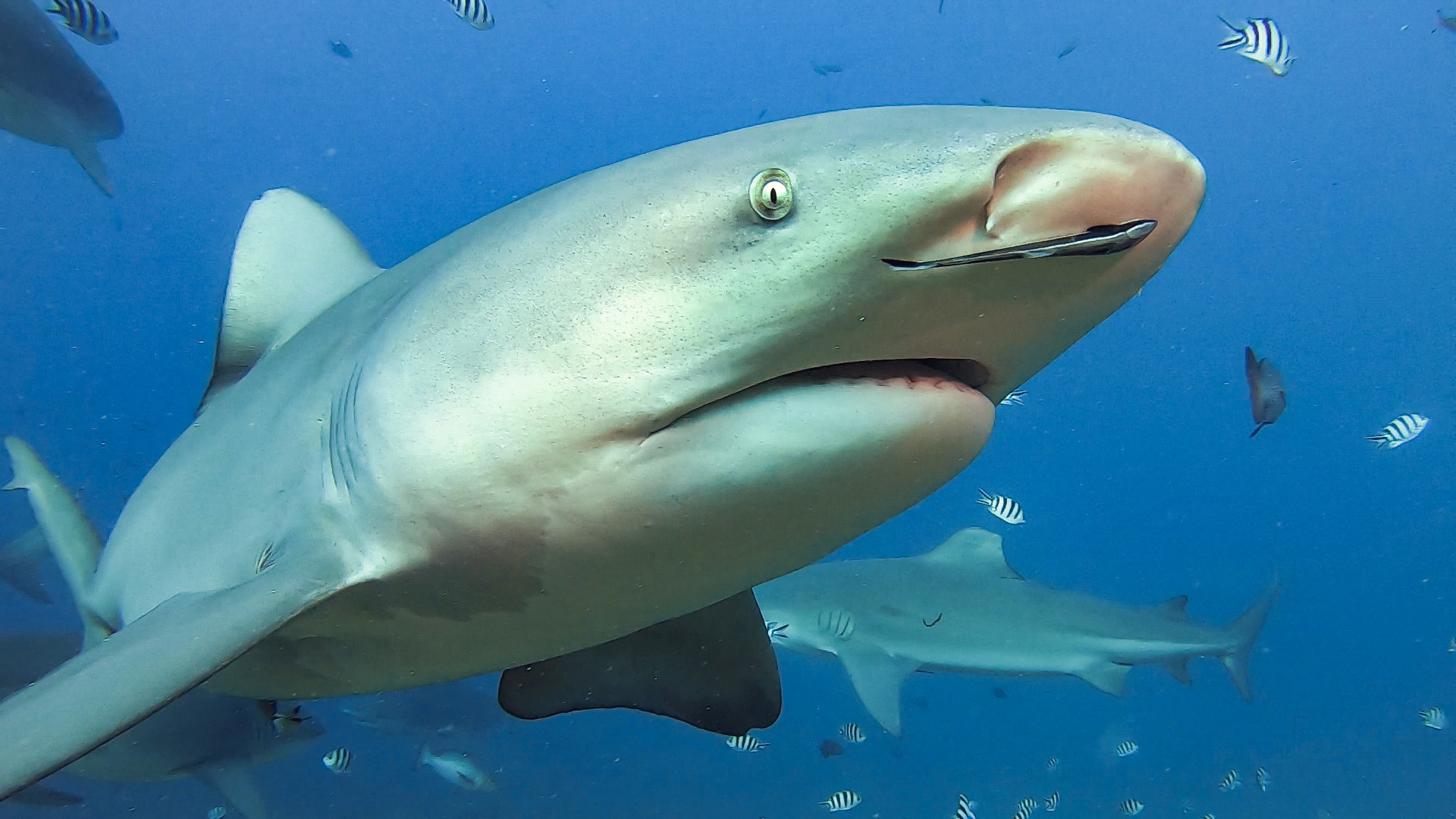 Our long term ongoing goals are establishing the Shark Reef Marine Reserve as a prime site for shark and marine life research; and producing scientific data that will assist not only in the conservation of the shark species that regularly visit The Fiji Shark Dive, but in threatened species inhabiting the waters of Fiji.  All research we conduct or sponsor has to meet two prerequisites: 1) the immediate aim is conservation-oriented; 2) the methods used are the least invasive.

We record all biotic and abiotic parameters on each shark dive from named individuals present and species composition to weather, current and water temperature.

This database is the backbone of our research into population dynamics, life cycles, inter- and intra-specific interactions.  Additionally this data allows us to address questions pertaining to the Shark diving industry: namely the effects of our activities on the animals and the optimum procedures we ought to adopt in order to ensure the safety of everyone involved in addition to creating the most exciting experience possible for our clients.

We have utilised a variety of state of the art telemetry ranging from acoustic to satellite, in order to understand Bull Shark behavior and ecology.  Acoustically tagged sharks are detected by ‘listening stations’ (acoustic receivers) deployed on Shark Reef and neighbouring reefs. The creation of such a receiver array provides presence-absence data of individual sharks, which together with other visual census data, allow inferences to be drawn about site occupancy and small-scale movement patterns

It is a well known fact that Bull Sharks use shallow coastal regions and rivers as parturition sites and nursery grounds where their pups are protected from both larger predators and food competitors. In recent years bull sharks displaying obvious signs of pregnancy have been tagged with acoustic tags and receivers were deployed at the entrances of Viti Levu’s main rivers: the Rewa, Navua, Sigatoka and Ba.

We have utilised LEK and TEK to identify Shark river habitats in Fiji, to learn how locals regard and use Sharks, and to capture ancestral legends and myths that shed light on the relationship between local people and these animals.  We will continue to use LEK and TEK to identify the existence and location of vulnerable and critically endangered shark species within the archipelago of Fiji, and also to monitor and shifts in the perceptions of sharks held by the local people.

We collect tissue samples to explore a variety of scientific inquiries: for toxicological studies linking the consumption of Shark to dementia and mercury poisoning; for stable isotope analysis and also for lineage construction.   One of our central aims is contributing to the mapping of the Bull Sharks’ global genome to determine whether there are distinct local populations warranting distinct local Conservation measures.

Knowledge about the genetic population structure of a species is fundamental to a vast array of fields ranging from evolutionary biology to species conservation management. Several shark species have been found to have low genetic diversity and smaller population sizes in comparison to other marine taxa.  These identifiable contrasts make genetic population studies an increasingly important tool for strengthening conservation plans.  Global surveys of the genetic structure in pelagic shark species confirm connectivity within and between ocean basins, whereas  biogeographic barriers (produced for example by ocean currents), changes in sea surface temperature, physical barriers, upwellings, and resource availability can cause genetic population structure in coastally oriented sharks. Combining the bull sharks’ capability for long-distant movements and the species’ longevity, significant genetic exchange is generally assumed. To determine whether our bull sharks in Fiji are genetically connected or isolated, more than 100 individuals were sampled between 2007 and 2017. To date, the studies revealed strong genetic differentiation between bull sharks from the western North Atlantic and Indo-Pacific, with significant genetic structuring in specimens from Fiji.  Additionally the Fijian bull shark population is isolated and genetically differentiated making it a special interest population and vulnerable to extirpation.

We directly observe and record the animals’ behaviour. This research is principally aimed at deciphering dominance and aggression patterns, hierarchy and personality profiles.  Understanding the behaviour of each individual and the aggregate as a whole plays a critical role in how we tailor our actions and approach when hand feeding and interacting with the sharks.

These counts are aimed at recording any changes to the biodiversity within the Reserve and at improving our management of the area. Preliminary results indicate that as a consequence of changed feeding protocols, the Fish population of Shark Reef has evolved from being predator- and scavenger-dominated to one in line with what would be expected of a vibrant and rich reef ecosystem. We have also recorded several range extensions, some of which spectacular and have identified a few Fishes that may well turn out to be new species.